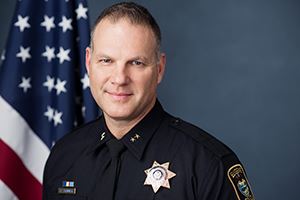 City Manager Jon Ruiz selected Chris Skinner to serve as Eugene’s Police Chief. Skinner joined the City on April 30, 2018. Ruiz noted Skinner’s demonstrated leadership abilities and depth of experience as qualities that are important to the department and the community and will help make him an effective police chief.

“Chris is known for building relationships, using innovative approaches, and leading by example. He has an authentic and inclusive leadership style, and we’ve heard from people across the northwest that he is an experienced and well-respected law enforcement professional. I am confident he will lead our police department with fairness and compassion in a way that builds trust within EPD and with the community.”

In June of this year the City Club of Eugene has inaugurated a new interview series called community spotlight.

NAACP president and City Club president elect Eric Richardson will host monthly interviews with local community leaders. This month will feature new Eugene Police Chief Chris Skinner. The interview will be a one on one session with audience questions at the end of the 45 minute interview.